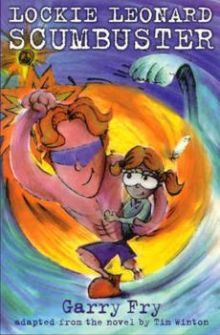 Recently, our English class has finished reading ‘Lockie Leonard-Scumbuster the play’ written by Garry Fry which he adapted from the story by Tim Winton in 1993. The play was really confusing and not exactly my cup of tea.

Lockie Leonard is a 13 year old boy going through puberty and discovering the ups and downs of high school, Lockie thinks his brother Phillip is awkward and a nerd while is younger sister, Blob, just eats and makes a mess of everything, his dad, Sarge, is a police officer at the local station and his mum is a stay-at-home mum who takes care of Blob. just the ordinary Aussie family indeed.

Lockie’s town is under some environmental issues, the towns local Harbour is polluted with waste from the nearby factories. Lockie and his best mate, Egg have come up with an idea to save the towns Harbour. They decide to hold a protest to stop these factories waste dumped into the water, but then the mayor, Vickie’s dad (a.k.a Lockie’s ex) gets involved to stop this mayhem caused by Lockie. The mayor in the end owns part of the surrounding companies and of course doesn’t want to close them down. In the end Lockie saves the town by blocking the pipe ways with some help from Egg’s parents, so the companies can get a taste of their own medicine.

The play was rushed and confusing to read since it was read like a script, which I don’t mind but it’s a complicated read. Reading scripts should just be kept for drama classes. Exactly what ‘fpr05’ said earlier- ‘Lockie Leonard-Scumbuster to me is an ordinary play. It doesn’t give me the buzz that I look for when I read a book.’ No ‘buzz’ indeed. This part of the Lockie Leonard series is very cliche where there is a problem in the town, Lockie saves the day in the end. So predictable.

as i was growing up, i watched the lockie leonard series on channel 9. this show inpertiular was more understanding in terms of language but overall i didn’t like this part of the series.

One thought on “The Environment’s a Disaster- Lockie Leonard Review”