The Cartier print advertisement incorporates a plethora of techniques and features in order to captivate its targeted audience, which are young adults that are involved in a relationship. The product being advertised is a gold ring, studded with diamonds that could have been published in a magazine or as a poster. The key strategies used to make the ad effective include; the layout of the advertisement, emotive language, symbolism, colour, hook and repetition. These techniques are used to persuade the audience into buying the product.

The product (the ring) is the most salient feature on the page, as it is positioned in the foreground of the ad and is the largest object on the page. The reading path starts from the golden ring, which leads the responder’s eyes to the word, Love, as a black path is created from the ring to the heading. We are then drawn to the text which tells us to view the website. The large heading saying love is effective as it reinforces the product being advertised.

Emotive language is used in the ad to influence the responders emotions/feelings about buying the ring. An example from the ad says “how far would you go for love?” this sentence is used to make the responder think about the ring as a symbol of true love.

Symbolism is used on the title of the ad, as the fire on the letter ‘o’ symbolises passion which is also being used to remind the audience of their partners, evoking passionate feelings, and therefore persuading them to buy the ring.

Colour is one of the main techniques used on the ad as the dark red background sets the mood of love. The text is written in white so that it is visible to see off the red background and we are able to read the white Cartier logo.

Hook is used to make the viewer want to find out more about the ad. The Cartier advertisement uses this technique as it invites us to find out about more information by heading to their website. There is also a small amount of text written on the page. This may have been done so that the viewer can go and explore the features of the ring as well as explore other items for sale on the website.

Repetition is another main technique used in the advertisement. For example, the rhetorical question “how far would you go for love?” is used twice in the ad. I believe the composer has done this purposely to emphasise and reassure that the message goes across to the target audience.

Overall, I believe that the Cartier advertisement is effective in appealing to its target audience. The use of the dark red background creates a mood that reinforces the product being advertised. The use of second person language makes us feel like we are being spoken to directly. In my opinion, the advertisement achieved its main target of establishing the ring as a strong symbol of love. 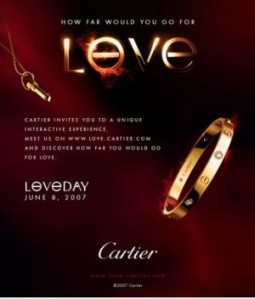