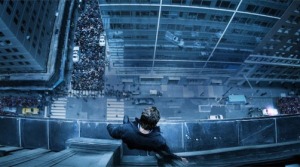 The movie ‘Man on a Ledge’ (directed by Asger Leth) was released in 2012. The movie is filled with current movie stars, up and coming movie stars and the odd one that has been in the business for years. Featuring Sam Worthington, Elizabeth Banks, Jamie Bell, Antony Mackie, Genesis Rodriguez and Ed Harris.

The film starts off pretty ordinary in the way that you are kind of just watching the average Joe walking back to his place looking like he is late for something. He starts having dinner looking pretty ordinary, until, he walks out onto the ledge of the Roosevelt Hotel. This man on a ledge is Nick Cassidy (Sam Worthington). An ex cop that was jailed for 25 years for stealing the famous Monarch Diamond worth over $40 million from multi-millionaire, David Englander (Ed Harris).

In an attempt to prove his innocence, Nick will try to steal the Monarch Diamond (kind of hard to do that if you have already stolen it) with a little bit of help from younger brother, Joey Cassidy (Jamie Bell) and Joey’s girlfriend, Angie (Genesis Rodriguez). While the small diamond robbery is going on, Nick Cassidy is interrogated by police negotiator, Lydia Merser (Elizabeth Banks).

This action packed thriller is one of the best movies that Sam Worthington has starred in and is set to star in more. Jamie Bell and Genesis Rodriguez are also ones that you will be seeing more of in the years to come. While Ed Harris and Elizabeth Banks are still going to be in outstanding movies for the next decade.

With the movie set in New York, it was always going to be hard filming a few movie scenes of the crowd on the street that was in lockdown, but they pulled it off. The shots from the ledge where absolutely incredible, those shots made you feel like you were right there on the ledge.

The lighting might look like a bit gloomy and mysterious, but that is what makes it so good. That fact that you can feel the suspense and the fact that you are always guessing what is going to happen next. But yet again, it would have looked better if they shot it on a nice a sunny day.

But, I have to say, the graphics could have been better. Be realistic, those ledges on all of the buildings were definitely made out of plastic or wood. Even the wall behind Sam Worthington was fake. You can tell that it has just been a piece of gyprock with some wall paper on it. You can tell that the whole top level is fake because you know why? Throughout the entire movie not once do they show you the whole rooftop of the Roosevelt Hotel.

Anyway, the movie was fantastic, the directing and casting was amazing, lighting was spectacular, but it is still a shame about the graphics. But it is still worth watching. I give it a 3 ½ out of five

One thought on “Don’t Fall off That Ledge! “Man on a Ledge” review”